The proper reaction to seeing the words “Sunday Gravy” on a menu should be one of uneasiness. Or fear. Wariness, maybe, with some eye rolling thrown in. And unless there’s an Italian grandma within 30 feet, it probably shouldn’t be ordered.

Is this the gravy’s fault? No. It’s a perfectly fine dish, in theory. And every once in a while you’ll get a nice, robust one. But not very often. The things that restaurants pass off as gravy these days—those thin sauces studded with gristly nuggets of meat—are as common as the other Italian foods Americans have a knack for putting out in tedious, mediocre droves. Meatballs come to mind. As does tiramisu.

So it’s a testament to Viaggio that the gravy was even ordered. It takes a promising beginning to take the risk, but at the time everything seemed to be in place. A vase of herbs served as the only decoration on the table, and it was a charming touch. The sprigs of parsley and sage were fresh enough that you could pinch and sprinkle them on top of your meatballs. (Not that they needed it; they were hearty, juicy things, with a strong note of Parmesan). And in case the desire for greens struck, there was the salad the meatballs were served with, mixed greens mingling with sprightly tomato sauce. The other appetizer on the table, a stack of crispy, golden disks of eggplant layered with mozzarella and topped with a heap of bright arugula (pictured), was on hand to provide greens, too. (Though, admittedly, this did little to make the dish seem nutritionally sound.)

And so, feeling encouraged, we ordered the gravy. The server warned that it was too much food—an order of veal ricotta was on its way as well—and he was right. The gravy-sauced pasta that arrived was so large it could have fed the entire block. But the sauce was full of huge, tender chunks of beef so sumptuous that it was impossible to resist eating the whole thing. The veal was only slightly more manageable: It was paired with silky spinach and soft ricotta, elements that gave the pan-fried veal the illusion of lightness. And as if the dish itself were not enough, it was served with a side of cheese tortellini, making it impossible to tackle the entire package.

But that was okay. Had Viaggio turned out to be like so many other restaurants of its kind, restaurants where the red sauce has no nuance and the endless menu no soul, there would have been no reason to take the overabundance of food home. But instead, Viaggio deftly wrapped the food to go, where it could be picked at during the ride home, nibbled on while watching Letterman, and enjoyed until every last bit was gone. 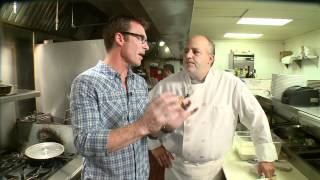 Best Places To Eat Before The Show In Chicago